Florida Vet School Uses Hyperbarics to Save a Seahorse 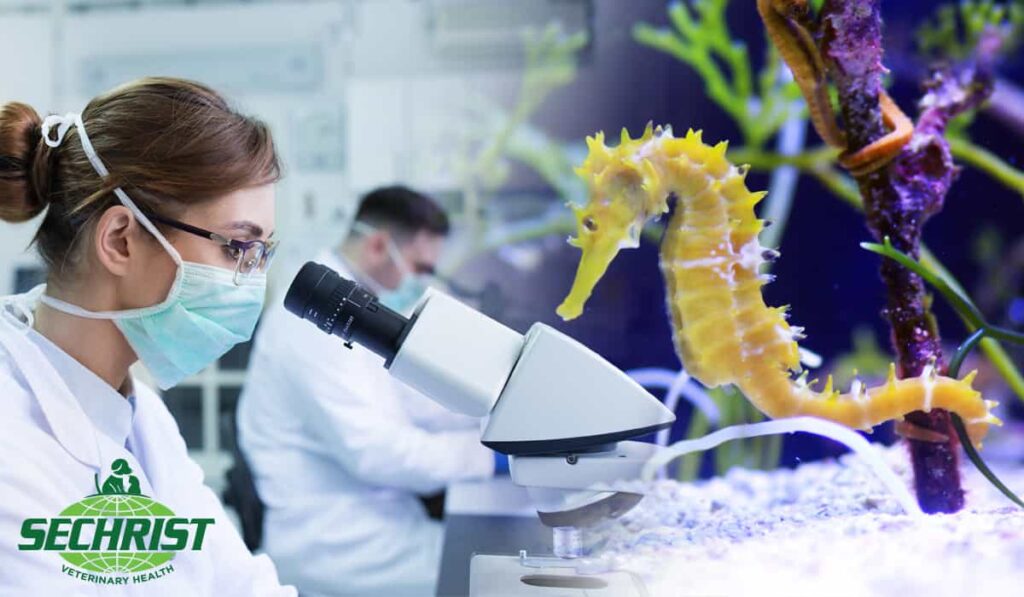 For Carol Benge of Chiefland, Florida, a medical emergency is not a new experience. It was in February of 2020 that Benge marked the important milestone of five years free of cancer, and as a treat to herself she purchased a new aquatic friend. Louie, a silver-and-black seahorse, immediately became part of the family. When the Covid-19 pandemic hit shortly afterwards, the presence of a new arrival in Carol’s home aquarium was a soothing reassurance against the trauma of lockdown.

So it was a matter for deep concern in the household when, in September, Louie appeared listless and began to bob horizontally in the aquarium when he wasn’t hitched to the protein skimmer at the top of his tank. The 3-inch long seahorse showed few signs of engagement with the world or with the minuscule brine shrimp Benge fed him as a treat, and it was clear to his owner that something was amiss. Noting the small bubbles gathered around his tail, she immediately recognized a symptom of Gas Bubble Disease. Much like the decompression sickness that can affect scuba divers, the disease can affect a fish’s metabolism and, if left to worsen, will cause their death.

Benge, who relates how feeding Louie by hand had become a tremendous bonding experience for her, knew that she had a limited window of opportunity in which to save her seahorse. Having not seen him swimming for over two weeks and concerned that she had failed him, she immediately called her veterinary surgery. 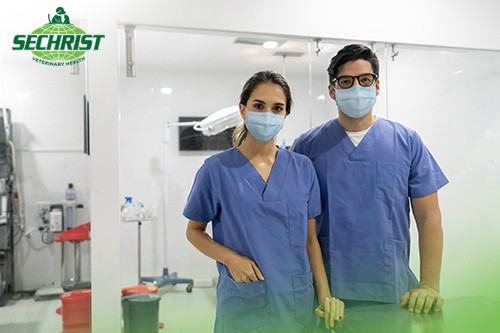 After a short conversation in which the Florida-based special needs teacher had to explain that she was not seeking help for a cat or dog by the name “Seahorse”, the surgery had to admit that they did not have the institutional knowledge to deal with Louie’s condition. Feeling that 2020 had been a tough enough year, Benge was not about to give up. She loaded the seahorse into a temporary transport tank and headed for Gainesville, a 40-mile drive northeast of Chiefland, and site of the University of Florida’s Veterinary Medicine College – the only such institution statewide. The experts in vet medicine there offer holistic hyperbaric oxygen treatment for pets, although at that point they hadn’t tested the process on fish.

With little other option to save Louie’s life, Benge accepted the College’s offer of an experimental treatment. At no cost to the pet owner, resident Tatiana Weisbrod asked if she could try hyperbaric oxygen treatment (HBOT) on the stricken seahorse. A treatment commonly used to help humans with decompression sickness, it seemed to offer the best chance of survival recovery for Louie.

The best, but by no means a sure thing. Covid protocols meant that Benge could not stay with her new friend as the experimental treatment took place, so she left him in the capable hands of the UF team and hoped. Taking control, they medicated a sedated Louie with two injections and placed him into a glass tank which was transferred into the chamber. They then watched through portholes to ensure that the patient did not become agitated, and for three and a half hours, they placed their hope in science.

To the joy and relief of the residents of Benge and no doubt Louie as well, the treatment paid off entirely, giving a brand new lease of life. In an experiment that will be of huge interest for those looking to learn more about HBOT investment for veterinarians, all signs of Gas Bubble Disease were gone and Louie returned home with a delighted Benge to enjoy a hand-feeding of brine shrimp.

The UF veterinary team had a hunch, based on what is known about treating decompression sickness (otherwise known as “The Bends”). Hyperbaric chambers allow pressure to shrink the size of bubbles in the bodily tissue, allowing them to be reabsorbed into the muscles and the patient to experience immediate symptom relief. It works for scuba divers and – we now know – for fish affected by the sister malady. Up until now, hyperbaric oxygen has been used mostly on cats and dogs with traumatic injuries, but Louie’s pioneering treatment likely means that more veterinarians will expand their referral base with HBOT. Gas Bubble Disease can occur when an aquarium has higher-than-usual saturation levels of a gas (usually nitrogen), and for reasons as yet unknown is particularly prevalent in seahorses.

The story shows just how much of a difference good fortune can make in veterinary and other medical science. Had Carol Benge not read widely on seahorses, she would not have recognized Louie’s symptoms for what they were. Had she not taken the hour’s drive to Gainesville, the vets there would not have thought to try a HBOT chamber on a seahorse. Had it not worked so (pardon the pun) swimmingly, there would have been little reason for aquatic vets to consider veterinary hyperbaric chamber suppliers in looking for a way to treat fish. And Louie would not have come home to make a full recovery.

As well as a heartwarming story, Louie and Carol’s amazing journey may well have direct implications for veterinary surgeons across America and indeed the rest of the world. The practice of offering veterinary HBOT for trauma related cases in animals is still not standard in vet clinics, but this extension of its application may lead some to look at the idea in a new light. At the moment, the treatment is given on a referral basis which – as in Carol’s case – can lead to long, last-ditch journeys. As the story spreads, so too may the treatment.

For Wiesbrod, who had the idea to modify a treatment she had used in a different way – and saved Louie’s life in doing so – it’s been the chance to achieve a milestone in Hyperbaric Oxygen Therapy and veterinary medicine. For those of us with ailing aquatic pets in the future, it is a flicker of hope that they can be treated successfully and have a long, happy life after suffering with a condition that can strike all too easily.