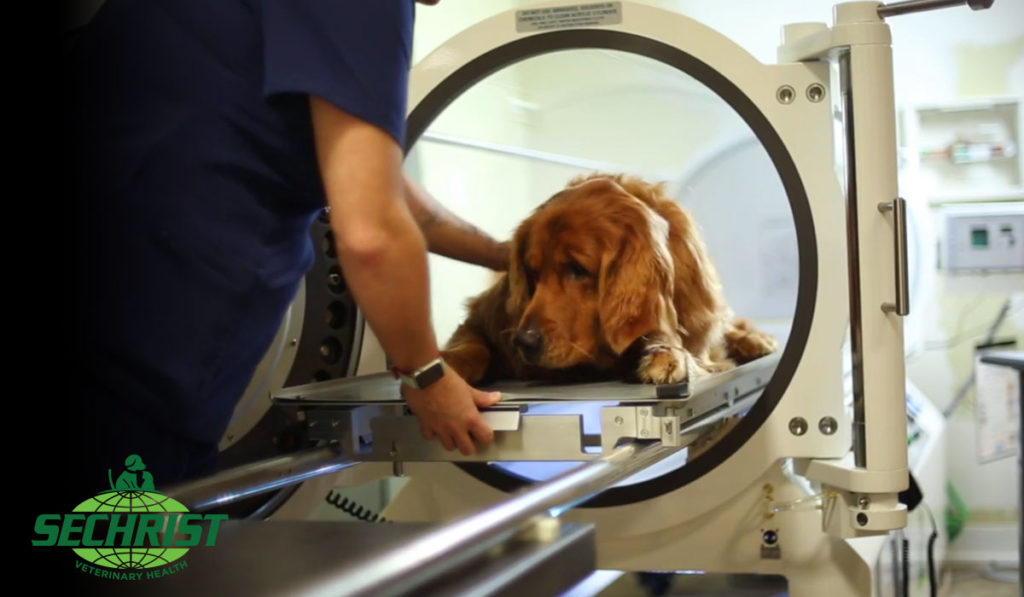 Alex, is a super sweet Golden Retriever that presented to South Paws for acute paresis in his pelvic limbs. The owner reports that the signs were very sudden and that they did not witness any type of trauma or accident. On presentation, he was a nonambulatory, upper motor neuron, paraparetic and had no movement in his back legs. Pain sensation in both the lateral and medial dermatomes was present, but severely diminished, indicating a serious cord injury. After talking with the owners, I explained that he had suffered a significant spinal cord injury and that he would require a CT examination. Interestingly, on his CT exam, he showed evidence of a large, compressive, intervertebral disc at T8-10. Golden Retrievers as a breed do not commonly suffer from intervertebral disc disease. Additionally, intervertebral disc disease at this location is considered rare even in breeds that are predisposed to IVDD. 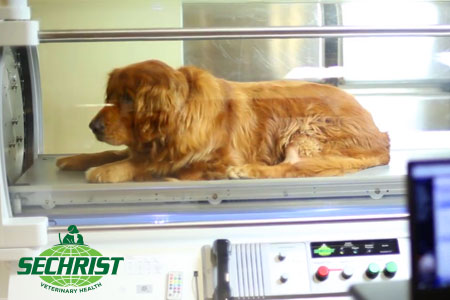 Alex was more than 110 pounds. I prepared the owner for a long and difficult recovery. It was explained that he would require both surgical decompression of the disc material, preconditioning and postoperative hyperbaric oxygen treatments, and finally physical therapy. This would be a complete approach to his treatment plan and give him the best chance of being able to walk again. I explained that this would be a long, hard journey for him to undergo, but that I thought with his strong will, he would be able to recover in time.

Preoperatively, Alex underwent 3, preconditioning hyperbaric oxygen treatments. He was taken to surgery and a hemilaminectomy procedure was performed to remove the extruded disc material in his spinal canal. At the time of surgery, there was significant bruising and swelling of the cord. After surgery, Alex still remained unable to move his legs but did have improved sensation to his pelvic limbs. Postoperatively, we continued with a series of 7 hyperbaric oxygen treatments. At the end of 7 days, he was able to stand up and began to take a few steps with assistance. He has continued in physical rehabilitation and is now able to walk on his own unassisted by 10 days postop. (See the video) 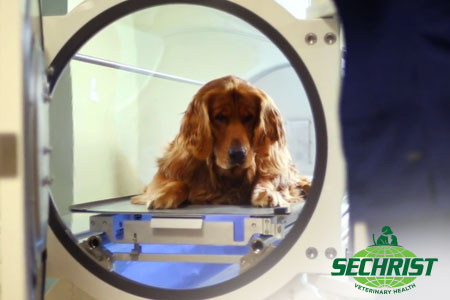 Intervertebral disc disease is a condition in which a degenerated disc is able to extrude material into the vertebral canal. In most cases there are 2 parts to this injury. The first part of the injury is caused by the concussive effects of the disc hitting the spinal cord. This leads to severe compromise of the blood supply to the cord, severe bruising, and edema. The second part of the injury includes the large amount of compressive material that pushes on the spinal cord and nerve roots causing pain, disruption of blood supply, and neuronal death. Surgery is aimed at removing the compressive disc material from the spinal canal. Hyperbaric oxygen is indicated to address the bruising, edema, and swelling associated with the spinal cord. HBOT treatments given preoperatively and postoperatively, also help prevent and address any reperfusion injury after decompression of the cord. The addition of hyperbaric oxygen shortens our patient’s hospital stay, leads to a faster recovery of motor function and voluntary urination, and increases the prognosis for return to ambulation.

Sechrist Industries, Inc uses cookies to ensure that we give you the best experience on our website. If you continue to use this site we will assume that you are happy with it. If you wish to opt out of cookies please click No.OkNo