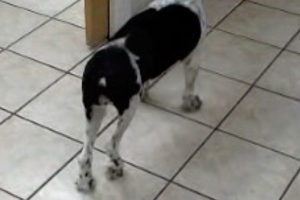 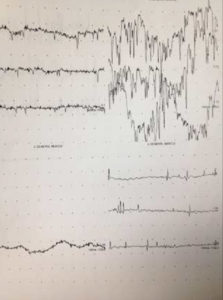 An 8-month-old F/S Springer Spaniel was presented by referral. The patient had a history of severe bilateral hip dysplasia with luxation of the right rear hip. A femoral head ostectomy (FHO) had been performed one month prior to referral. The patient had been knuckling on the operated limb since the surgery . Abnormal insertional activity on needle EMG confirmed a sciatic nerve lesion. An exploratory surgery at the FHO site revealed granulation tissue associated with the ostectomy site. The sciatic nerve was enveloped by this reactive tissue. Suture material from the previous surgery was removed. The femoral neck excision was revised. A two-week course of enrofloxacin (based on sensitivity results) was begun, and a total of 7 HBOT sessions over 10 weeks were given. Marked improvement in gait was noted after the first three sessions (Image Below), which were given within 48 hours post op. Progressive recovery continued. Normal right rear limb gait was noted on follow up 5 months later.