Non-Healing Wound in a Feline Post-Op 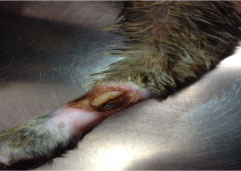 Non-Healing Wound in a Feline Post-Op

A 2 year old feline was referred two months after a declaw procedure on all four legs. A wound had developed on the right rear limb at the metatarsal/tarsal level post-op, and had not resolved despite conventional wound care treatment during a month long hospitalization at the referring veterinarian’s practice.

The wound appeared dry, with bone exposure, and lack of granulation tissue at the time of referral. The patient was given one-hour sessions of HBOT at 1.5 ATA BID for 16 consecutive days, and once daily Artemis NRT (HILT) laser therapy. Granulation tissue rapidly appeared.

Both Hyperbaric Oxygen Therapy and High Intensity Laser Therapy have been shown to increase the speed of wound healing.