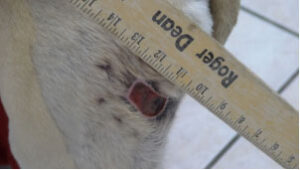 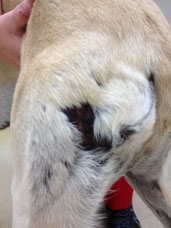 HBOT in the Treatment of a Non-Healing Dog Attack Wound

An adult greyhound was presented with the
complaint of a non-healing wound on the caudal and lateral aspect of the left thigh (Image 1). The wound was the result of a bite by another canine, and had been managed with antibiotics and wet to dry bandages without success over the past several weeks prior to referral. The femur was exposed, and the remaining muscle tissue was largely devitalized, with minimal granulation tissue on the wound margins. Due to financial concerns, the owner was only able to present the patient for HBOT sessions as an outpatient sporadically over a 6 week period.

Antibiotics were continued, an E collar was employed, and daily hydrotherapy was initiated. One hour HBOT sessions were begun at 2 ATA. Granulation tissue proliferated, and wound closure commenced. Six weeks later and a total of 18 one-hour HBOT sessions, the wound became superficial and less than one inch in diameter at this point. The owner elected to discontinue HBOT and allow granulation to continue without further therapy. (Image 2)

Image 3 (Left) was obtained two months after HBOT was discontinued; the wound had closed.

This case illustrates how HBOT can enhance healing even when employed sporadically due to financial or logistical concerns. Evidenced based medicine demonstrates that adjunctive HBOT is beneficial in wound healing.