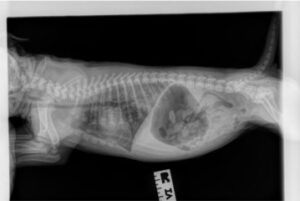 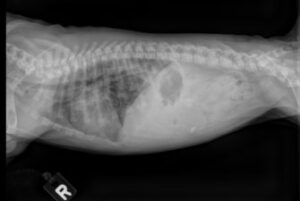 A 5-week-old female puppy was presented after it was discovered in respiratory arrest immediately after accidental ingestion of a large dry piece of dog food kibble. The owner cleared the oral cavity with her finger then performed chest compressions until the puppy began spontaneous respirations. The puppy was dyspneic, tachypneic, and cyanotic on presentation, and had increased pulmonary bronchovesicular sounds in all lung fields. Admitting radiographs revealed non-cardiogenic pulmonary edema.

The puppy was placed in the Sechrist SV500 Chamber, and Hyperbaric Assisted Oxygen resuscitation was initiated. The puppy was initially treated with one hour of HBOT at 2.0 ATA, then transitioned to 50% oxygen at sea level pressure (“free flow”). After a 4-hour period in free flow, the puppy was given another HBOT session at 2.0 ATA for one hour. The puppy’s respiratory rate and effort gradually normalized, and follow up thoracic radiographs revealed marked improvement in the pulmonary infiltrates.

Over the following 24 hours the puppy was treated with two more HBOT sessions, and transitioned back to room air, 21%, free flow at sea level pressure.

The Sechrist Veterinary chambers allow patients to be treated in both HBOT mode and free flow mode. Therefore, Hyperbaric Oxygen Therapy under pressure, and Hyperbaric Assisted Oxygen Resuscitation can be achieved in a single unit, with IV infusion access through door ports.